hitchBOT Broken Beyond Repair In Philadelphia, Two Weeks Into US Tour

File this under “this is why we can’t have nice things.” hitchBOT, the robot hitchhiker from Port Credit, Ontario, was destroyed only two weeks into its tour of the United States. After completing a cross-country trip across Canada, as well as trips across Germany and the Netherlands, our hitchhiking robotic friend made it as far as Philadelphia before being damaged by an unknown assailant and left broken and sad in the street (at least I’m assuming it was sad).

The creation of Dr. David Smith (McMaster University), and Dr. Frauke Zeller (Ryerson University), hitchBOT began its life with a trek across Canada back in July of 2014. Over a span of 26 days, hitchBOT made it from Halifax, Nova Scotia, all the way to Victoria, British Columbia. After that, hitchBOT spent time in both Germany and the Netherlands touring those areas successfully without being damaged. But after starting on the East Coast of the United States a few weeks ago, and hoping to make it to San Fransisco hitchBOT instead made it to…the slightly farther West East Coast. hitchBot was sadly found damaged beyond repair in Philadelphia yesterday.

I suppose it makes sense that the city that would boo Santa Claus might also feel intimidated by a small, hitchhiking robot. It stinks that the plucky little robot couldn’t complete its cross-country trip across the remainder of North America though. For their part, the team behind hitchBOT is taking this unfortunate event in stride, claiming that they have no intention of pressing charges or hunting down the assailant(s) responsible.

hitchBOT’s trip came to an end last night in Philadelphia after having spent a little over two weeks hitchhiking and visiting sites in Boston, Salem, Gloucester, Marblehead, and New York City. Unfortunately, hitchBOT was vandalized overnight in Philadelphia; sometimes bad things happen to good robots.  We know that many of hitchBOT’s fans will be disappointed, but we want them to be assured that this great experiment is not over. For now we will focus on the question “what can be learned from this?” and explore future adventures for robots and humans.

Awfully neighborly of them, but it would certainly have been nicer if we could expect even a small amount of civility from people. Thanks Philly, today you’re the reason why we can’t have nice things. Let us know what you think. Would you pick up and travel with a hitchhiking robot like hitchBOT? Let us know in the comments below or on your favorite social media site. 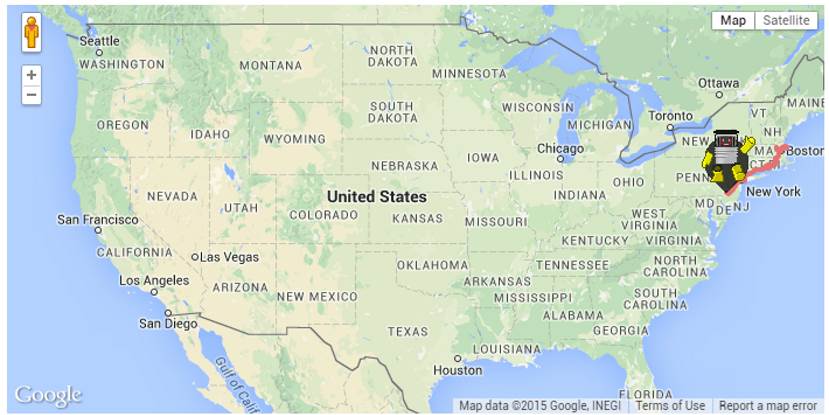