We’ve had a chance to check out some of Razer’s gaming hardware and in each case have come away quite impressed. Their Blackwidow Chroma line of mechanical gaming keyboards is set to expand starting today. The Razer Blackwidow Tournament Edition Chroma V2 brings a tenkeyless design as well as Razer’s Instant Trigger technology to a compact gaming keyboard.

Gamers on the move will appreciate the smaller, compact design as well as the removable braided cable. A magnetic removable wrist rest is also available for added comfort, but can also be removed for increased portability. Also included is Razer Chroma V2 system, which allow for 16.8 million colors and multiple effects that can be created and saved using the Razer Synapse software. Users can still share their Chroma settings with other gamers, and Razer has provided custom lighting profiles to start alongside popular games including Overwatch and Call of Duty.

New to the Blackwidow Tournament Edition is Razer’s Instant Trigger Technology (ITT). I’ll just let Razer tell you all about their new tech:

The new keyboard boasts Razer’s new Instant Trigger Technology (ITT), enabling industry-leading response times within a gaming keyboard. Upon actuation of a single key, Razer’s ITT cancels any delay between key actuations to provide rapid response from your keyboard to your system.

All of this, along with Razer’s award winning Razer Yellow, Green, and Orange switches provide a platform for however you like to play. Take a look at the video below, and then check out the full press release a little bit below that for more information on the newest member of the Blackwidow family.

What do you think about the Razer Blackwidow Tournament Edition Chroma V2 keyboard? Tell us all about it in the comment section below, or on Google+, Twitter, or Facebook.

The Razer BlackWidow TE Chroma V2 offers users the choice between Razer’s multi-award winning mechanical Green, Orange or Yellow switches. Designed without a tactile bump or click, the Razer Yellow switches are silent and rapid to meet the demands of fast-paced first person shooter (FPS) and online multiplayer battle arena (MOBA) type games. With an unmatched response rate, Razer Yellow switches offer a 1.2mm actuation point, is 40 percent faster than standard mechanical key switches, and has been tested under the most intense gaming sessions to ensure a lifespan of up to 80 million keystrokes.

“Gamers rely on their gear to react and respond as fast as they do no matter the situation, from landing a headshot to combining ultimate abilities as a team,” says Min-Liang Tan, Razer co-founder, and CEO. “Timing is critical. The BlackWidow TE Chroma V2’s Instant Trigger Technology works hand-in-hand with our Yellow switches, setting the bar for the industry’s fastest response rating on a keyboard with the ultimate combination of hardware and software.”

The Razer BlackWidow TE Chroma V2 features individually backlit keys that are powered by Razer Chroma™ technology, which unlocks customizable lighting features that can be synced across devices. Gamers can choose from 16.8 million colors and a variety of effects. Custom settings can be created using the Razer Synapse software platform and shared with millions of other Razer software users via the Razer Chroma Workshop. In-game Razer Chroma lighting profiles are also integrated into popular game titles, including Overwatch and Call of Duty.

The Razer BlackWidow Chroma TE V2 is available for order now from RazerStore.com.

Razer™ is the world’s leading lifestyle brand for gamers. The triple-headed snake logo trademark of Razer is one of the most recognized icons in the global gaming community, and the company has a fan base that spans every continent. Razer has designed and built the world’s largest independent gamer ecosystem of hardware, software and services with over 35 million users.

Razer’s award-winning products include hardware such as high-performance gaming peripherals (for the PC and console platforms), the Razer Blade line of gaming laptops; software such as Razer Cortex (a game optimizer and launcher); and services such as Razer zGold (a virtual credit service and payment engine for gamers). The company additionally provides audio-visual certification through its subsidiary THX Ltd. 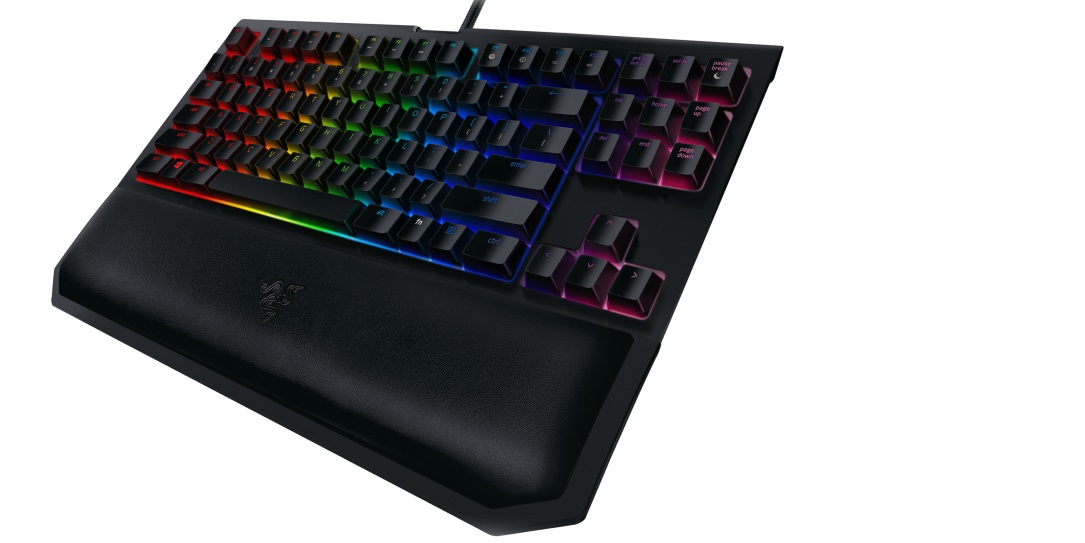