Many people likely have more than one set of headphones. One for gaming, one for listening to music, and possibly a set of earbuds for the gym. Fortunately, more headsets are coming out that are trying to bridge the gap between wired and wireless use. Our HyperX Cloud MIX review takes a look at one such option from Kingston’s gaming arm which offers wired and Bluetooth connectivity for both gaming and mobile use.

The HyperX Cloud MIX has the following features and specifications:

As far as design goes, the HyperX Cloud MIX don’t differ too much from other HyperX Cloud headsets we’ve reviewed here at Techaeris. Even though a bit subdued in design, they are easily recognizable as a HyperX headset from a glance, although the silver HyperX logo on the side of each earcup definitely helps with that distinction.

With an overall black look, the faux-leather wrapped headband is nicely padded and is about an inch thick and an inch-and-a-quarter in width. The HyperX logo is debossed on the top and is barely noticeable. Unfortunately, it’s missing the signature headband stitching that appears on some of their other headsets and I thought that was a nice design touch omission. Either end of the headband ends in a plastic piece from which a short braided cable attaches to the earcups. An L and an R are stamped on the inside of each plastic piece to indicate the appropriate earcup.

The earcups are attached to the headband by way of a metal inverted Y piece which is a brushed gunmetal colour. The matte plastic outer plate of the earcup is about 3 1/8-inches tall by 2 5/8-inches wide and, mentioned above, has the HyperX logo printed in silver on it. The rest of the outside of the earcup is covered with a soft black finish. The metal Y attaches to either side of the outer earcup in the middle and allows the earcup to swivel up and down slightly. Unfortunately, the earcup doesn’t swivel back and forth but there is enough flex in the metal attachment for some movement to provide an optimal fit.

The right earcup houses the Micro-USB charging port, Bluetooth power button, status LED, and Bluetooth volume buttons (starting from the bottom and working their way up the back). The left earcup is where you’ll find the Bluetooth multifunction button on the back side, the 3.5mm audio port at the bottom and the microphone port located slightly in front of that. Finally, the Bluetooth microphone sits on the left earcup slightly under the middle of the front edge.

The memory foam ear pads are also covered with faux-leather and are about an inch thick. The 2 3/8-inch by 1 7/8-inch ear pad interior provided ample enough space for my ears and they are pretty comfortable when worn with or without glasses.

The detachable microphone starts with a 3.5mm jack, extends with an articulated flexible metal arm, and ends with a foam covered microphone. The microphone itself is rather large at about half-an-inch by three-quarters of an inch.

The Micro-USB charging cable is of the standard plastic coated variety and is pretty short at about two feet in length, including the connectors. The 3.5mm cables, on the other hand, are nicely braided and offer up some decent length. The 3.5mm cable with control unit runs about 56-inches in length. While this is great for computer use, the extra length can be a bit of a nuisance when plugged into an Xbox One controller.

The control unit is about 16-inches down from the end that goes into the headset, which is marked with a tag and a grey ring. The control unit itself is about an inch-and-a-half in length, 3/8-inch thick, and about 1/2-inch wide. It does have rounded edges and includes a microphone mute switch on one side and an embedded volume dial. The 3.5mm extension cable is much longer and at about 80-inches with the split microphone and headset jacks consisting of the last 8-inches or so of the cable. At this length and couple with the length of the main 3.5mm cable, it’s definitely long enough for nearly any setup. In addition, being braided, the cables don’t tangle easily if at all.

The included carrying bag isn’t much as it’s just a thing fabric bag with drawstrings but the HyperX Cloud MIX headset and cables fit in it nicely. It can be used for storing your headset while not in use or carrying it around in a backpack when on the go.

While the HyperX Cloud MIX is obviously a gaming headset first, it doesn’t overly scream gaming with its subdued design aside from the larger HyperX logos on the earcups. The construction feels solid and the headset is fairly comfortable, although it did feel a bit tight on my head, when worn for a couple hours at a time. Additionally, they are pretty light, which is a good thing for wearing while on the go and not sitting on the couch playing video games.

When using wired, simply plug the 3.5mm cable into your console controller, console, PC, or mobile device (if it has a headphone jack). Once you’ve done that, your good to go. You can mute the microphone by sliding the switch on the control panel. You can also adjust the volume on the fly by turning the volume dial wheel in either direction.

Bluetooth functionality is just as easy. When powered off, press and hold the power button for 5 seconds. The Cloud MIX headset will turn on and the LED indicator will flash red and blue. Find the headset in your Bluetooth settings on your device, pair, and you’ll be good to go.

Once connected, you can use the volume controls on the right earcup or the Bluetooth function button on the left earcup to play/pause the current track, skip to the next track, skip to the previous track, or answer/hang up on a call. Finally, pressing the power button on the right earcup for two seconds will turn the headset on or off depending on its current state. The buttons are not only easy to feel for but are very responsive and work as one would expect.

Of course, being HyperX, this headset needs to withstand the gaming test. We tested the HyperX Cloud MIX on both PC and the Xbox One X through a wireless Xbox One controller.

On the PC side of things, sound during gaming was balanced with nice full bass. While positional awareness wasn’t as great as it could be compared to virtual surround or full surround sound headphones, games like Heroes of the Storm and Forza Horizon 4 were definitely enjoyable while using the headset. In addition, the sound while watching movies or listening to music was decent as well, albeit in stereo which made movies a little less than enjoyable as opposed to using virtual or full surround sound headphones or speakers.

When gaming on the Xbox One, you’ll need to plug the headset into an Xbox One controller. Once again, audio was decent for games like Forza Horizon 4 and other non-shooters. We decided to put Apex Legends to the test. Shooters are definitely where you notice the sub-par positional awareness. I’ve been using a pair of surround sound headphones so the differences were night and day. Fortunately, you can enable Windows Sonic for Headphones (or Dolby Atmos) on the Xbox One. After that was enabled, while still not perfect, it was easier to pinpoint sounds in Apex Legends during the match.

On the Bluetooth side of things, the HyperX Cloud MIX headset is Hi-Res Audio certified. Offering less compressed sound over Bluetooth shows and everything from EDM to classic hip hop and rock sounded fairly balanced. The bass was fairly decent, a tad more warm than punchy. Considering I prefer warmer, fuller bass, I rather enjoyed using these for listening to music.

During our testing, the microphone worked great in multiplayer games and other members of my party or squad were able to hear me clearly and distinctly. I didn’t have any issues with teammates asking me to repeat myself in the midst of battle.

The HyperX Cloud MIX use Bluetooth 4.2 which, according to HyperX, should get you reception at a range of up to 10 meters. In our testing, we were able to get pretty close to this in open spaces, between floors, and around walls in the house.

As these have Bluetooth, they also have the ability to take phone calls when paired to your smartphone. Unfortunately, during our test call, I found myself having to speaker louder due to the placement of the Bluetooth microphone. Numerous times during the conversation, the other party had to ask me to repeat myself. Once I started speaking louder, they stopped asking but it definitely felt a bit strained. Curiously enough, attaching the microphone made no difference and given the product diagram in the Quick Start Guide, I’m assuming that calls are delegated to the Bluetooth microphone while all other voice is dedicated through the microphone.

HyperX claims a battery life of 20 hours while used in Bluetooth mode. We were able to get just under this nearly every time with the volume set to about 60% during multiple tests. As mentioned in the sound section, this volume level was acceptable for most usage scenarios as it is loud enough to block out most outside noise without blasting your eardrums.

On the charging side, the HyperX Cloud MIX take about 2 hours to recharge fully when depleted.

At the time we wrote our other HyperX Cloud headset reviews, they were priced at around US$100. The HyperX Cloud MIX, on the other hand, have a selling price of $199.99. While the sound quality is decent and definitely comparable to other Cloud headsets, double the price just to add Bluetooth capabilities is a bit much. While you’d be potentially saving by only having one headset, while the design isn’t “out there,” these still look like a gaming headset with the large HyperX logo on each earcup and not everyone will want to wear them out and about.

*We were sent a sample of the HyperX Cloud MIX for the purposes of this review. 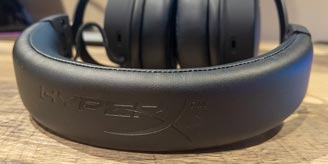