Adieu, Forza Horizon 3 #Forzathon… time to drive off “Into the Horizon”

The Forza Horizon 3 #Forzathon February 8th — and — event gives you a chance at 500 more gamerscore spread across four new achievements. The four new “challenges” will, of course, be live indefinitely. While you’re at it, don’t forget to check out this week’s Forza Horizon 4 #Forzathon challenges.

The good news is, if you’ve completed 2500 races over the years, you’ll insta-pop all these. On that note, that’s a pretty tall order. Even though I have some 350 hours into the game, I only popped Cleaning Up the Festival and The Final Tour so chances are, you’ll have some work to do.

Once you complete each achievement, you’ll snag 125GS.

Cleaning Up the Festival

As with the rest of these achievements, this can be done in combination. Either complete 1000 races or Snowman skills or a combination of both. As far as races go, you could try to grind out Drag Races. For Snowman Skills, head to Blizzard Mountain and drive around taking out snowmen.

“Hot Wheels” Skills are completed in the Hot Wheels DLC expansion. Normally an air skill above the Ultimate Jump, nightw0lf discovered that Hot Wheel specific skills like Speed Boosts also count. Head over to the Half Pipe Climb circuit race in the Thrill City area (lower left of the map) just southwest of the Beach Blast Danger Sign. Choose Stunt Swap blueprint, swap out the stunt for a Boost Jump and proceed around the track. You’ll soon get to a point where you’ll Boost, Jump for a Hot Wheels jump skill, and then another Speed Boost. Once you see the second Speed Boost pop up, rewind and repeat. According to nightw0lf, you’ll get about 1% progress (21 skills) in just under 2 minutes.

So Long and Thanks for All the Drifts

This one may seem daunting with 2500 Races or Ultimate Skills as the target but there are plenty of Ultimate skills to be achieved. Everything from Ultimate Drifts to Ultimate Speed  Ultimate Air will count towards this nt.

What do you think about the “Into the Horizon” Forza Horizon 3 #Forzathon event and the fact that this is the last? Are you going to continue playing or move on to Forza Horizon 4? Let us know in the comments below or on Google+, Twitter, or 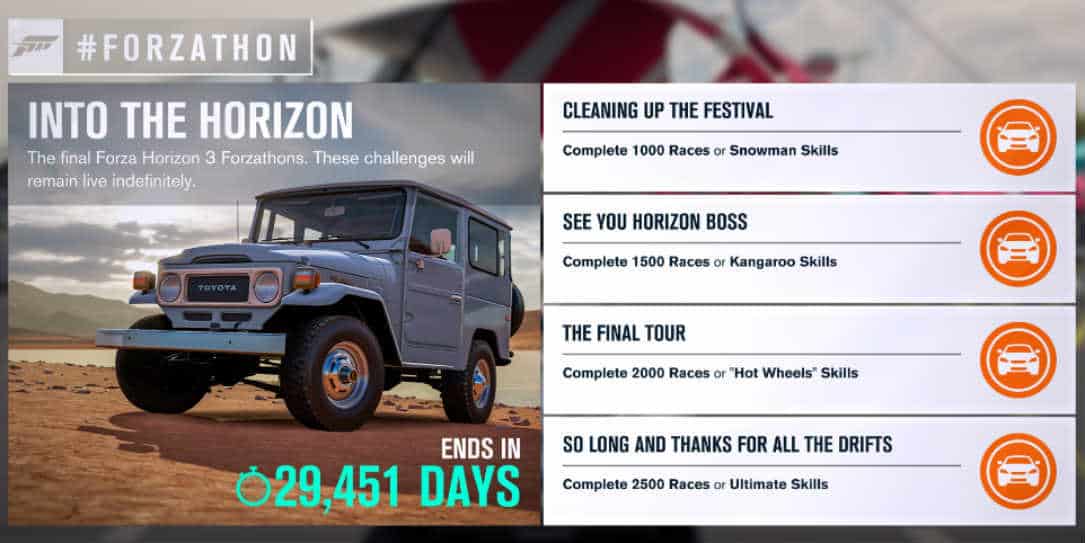