The new Honor 20 series has been officially announced

For the first time, the Honor 20 series are equipped with quad-cameras which the company says improves the capability of both the software and hardware. These cameras are supposed to be great in dimly-lit conditions and for zooming in and shooting wide shots. The Honor 20 series quad-camera system boasts a 48MP AI main and telephoto sensor with an aperture of f1.4 which is a nice wide aperture that allows more light into the sensor.

Both lenses come with optical image stabilization along with laser autofocus. Honor really concentrated a lot on the camera systems of this phone. The company is also selling their AI features and software which are supposed to give your photos even better quality. And that f1.4 aperture is also a big selling point.

The 20 Series also has AIS Super Night Mode – a feature that fully leverages advanced image processing based on powerful hardware equipment, to “deliver pixel-perfect photography” and more “pronounced shots” in low light. The AI is also able to detect when you’re shooting by hand and compensate for jitter or shake from the user’s hand.

There are literally a ton of features Honor is packing into this camera, many of them most users won’t use but at least they are there. Like AI Ultra Clarity Mode:

Equipped with IMX586 48MP main lens, the Honor 20 series’ 48MP AI Quad Camera allows users to capture photos with great clarity during the day, especially with the 48MP AI Ultra Clarity Mode. The AI learning capability and image processing speed has improved 134% and 46% respectively due to the dual-NPU and the dual-ISP enabled by the 7nm Kirin 980 AI chipset.

With this mode turned on, the camera will take several pictures at 48MP at once. Next, the Dual-NPU and the 4th generation Dual-ISP of the 7nm Kirin 980 AI chipset collates the best details from each of these 48MP photos and combines them to create one 48MP picture. Finally, a “Super 48MP Photo” is created, with its quality surpassing normal 48MP pictures. The details in dark areas are optimized, and colors are adjusted to appear more vivid.

The Honor 20 Series also features a “dynamic holographic design,” likely more marketing chatter but it is interesting. The display is layered with a glass layer, color layer, and depth layer which is supposed to give the display a sense of depth, FWIW. There is also virtual 9.1 surround sound on board which is powered by Huawei Histen 6.0 and is supposed to give you immersive sound.

You can catch the entire Honor 20 Series announcement by watching the YouTube video below.

What do you think of this new series of phones from Honor? Let us know in the comments below or on Twitter, or Facebook. You can also comment on our MeWe page by joining the MeWe social network. 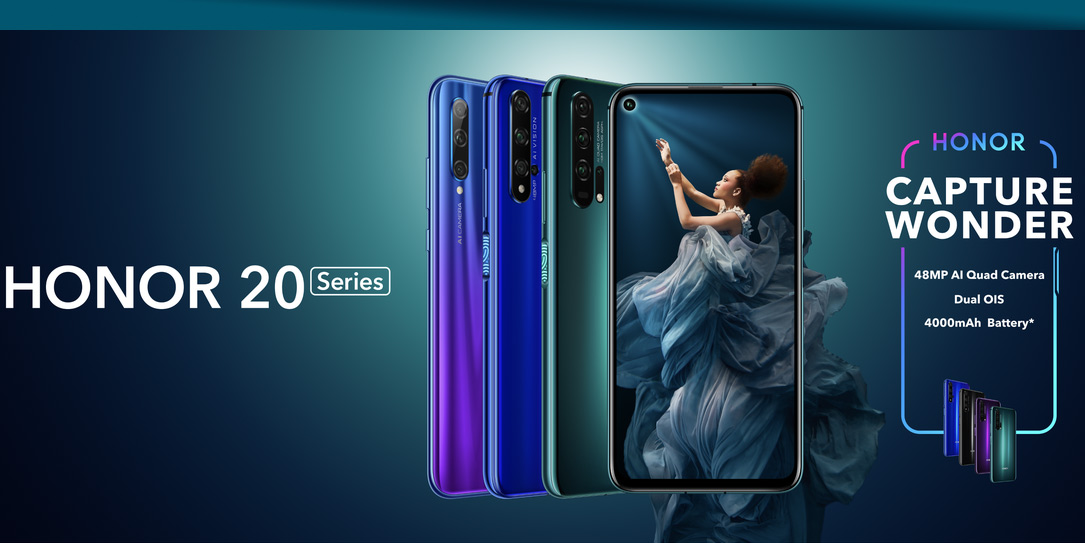