Kairos, The Sexy Smart Watch You SHOULD Be Drooling Over Wearables are the hot new category that everyone is interested in and we all are waiting to see how it will shake out. We already have Pebble, Samsung, and several others fighting for the space of smart watches. We expect an iWatch and we have seen Android Wear in devices like the Moto 360 and LG G Watch. I personally have used several different smart watches and there is one watch that has caught my eye intensely. That watch is the Kairos Mechanical Smartwatch Hybrid.

There are tech nerds, sure. If you are reading this there is a good chance that you are one yourself. This world also has a market for watch nerds. There are people who love watches and everything about a well designed watch. The Kairos watch is a smart watch made for those people.

The watch is a stunning piece of engineering. It has mechanical insides like the luxury watches that you are familiar with. It has a traditional dial and moving hands just like normal watches. The thing that is really cool about Kairos is that in addition to giving you the look and feel of a premium watch, they have added a transparent display on top of the watch face to allow for the use of smart watch functionality and when I say functionality, I mean essentially everything you can ask of smart watches today. The Kairos is up for preorder now and is expected to ship sometime at the end of the year. There are a few different models of the Kairos that are up for preorder. The base model is $499 MSW15 and has a silver metal finish and Miyota Japanese 827S movement. The next step up is a Black or Gold version of the MSW15 for $649. Then we have the SSW158M with a silver metal finish and SOPROD A10BV-2 Swiss Movement for $989 and it’s Gold counterpart for $1199. This may seem expensive if you are not a watch fan or if you have only worn the Timex variety, but to me these seem like fantastic deals for quality jewelry with technology built right in. Consider that Samsung Gear Neo is priced at $299 and that we may be looking at $249 for the Moto 360 and then consider the craftsmanship that will go into the Kairos, and maybe you will agree. Keep in mind though that these prices are for the preorder only and that they will go up once the preorder period has ended.

All of that being said, I was curious about the Kairos and reached out for some answers.

All in all I am super pumped about this watch and I think you should be too. We’ll try to stay in touch with the folks at Kairos and see what more we can learn down the line. 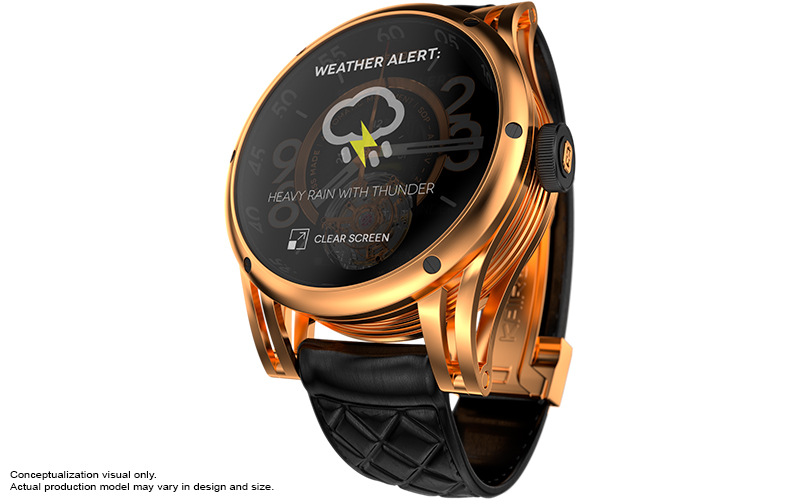