The Real Tragedy of Disney’s Tangled

If there is one thing we catch onto early in life, besides crying to get attention and candy being the most universal currency in existence, it’s that Disney Princess movies always end with a happily ever after. They begin with a girl who has a problem; then she meets a prince who somehow, usually obliviously, fixes it, and then she becomes a princess and everything is a-okay all the way into the sunset of the future. It’s a pattern seen across the board.

First, there was Snow White, you know, the fairest of them all, who was the victim of some girl-on-girl, fruit-related hate crimes, seemingly died for a moment, but was rescued by a prince who may have had a touch of necrophilia, and then all was grand. After, came Cinderella with the chores, curfew, and abnormal shoe size that ultimately led her to her prince with a little help from a fairy godmother who came out of literally nowhere, and despite a few straight-to-DVD sequels, everything was good with her too.

Beauty got her beast, Ariel got her prince and the ability to wear pants, and more recently, Elsa stayed single but got to live without fear or ever having to sweat, which is every modern girl’s dream. But what if there was a princess who didn’t get to live happily ever after? What if there was one whose real tragedy began after the credits had already rolled? Well, guess what. There is.

We have all seen Disney’s adaptation of the classic story Rapunzel in the 2010 film Tangled. We know she was a princess stolen by an evil, Cher-doppelganger witch and how she was forced to live in a tower and let her long, magical hair grow to uncomfortable lengths, and sure, that’s a pretty tragic life. However, it’s nothing compared to the fate Rapunzel must have faced mere weeks after being reunited with her possibly-mute parents. That reality being: she is stuck with the same haircut. Forever. “How could this possibly be?” you may be asking. To which I am answering, I have no idea. Here’s what we do know. The trouble begins and ends with a magical flower. Long before Rapunzel was even a glimmer in her parents’ eyes, the witch, also known as Mother Gothel, was using a flower made from a pure drop of sunlight to stay young forever. All she had to do was go to the flower, which she hid under a fake shrub, probably purchased at her local Home Depot, and sing to it. We don’t know how she found the magical flower or how she knew to sing to it, but it makes me wonder… did this old woman just go around singing to flora until something responded? Also, if she was so into botany, why didn’t she ever consider potting this flower and taking it home with her? Anyway, she visited the flower frequently, maybe even on the daily basis, until one day it wasn’t there anymore. And it wasn’t there because a queen in a far off kingdom was having a difficult pregnancy. Things weren’t going well, and somehow her minions knew to go pick this random flower, put it some water, and make the lady drink it. After, the queen was fine, and gave birth to a baby girl with long, blonde hair, which no one questioned even though the king and queen are both brunettes.

Mother Gothel was distraught that her flower, and by association, her ability to stay young forever, had been taken from her, and she did what any woman who knew the secret to eternal beauty would do: sneak into the royal bedroom of the king and queen to snip the eternal youth right off the head of that tiny princess. However, upon cutting off a lock of Rapunzel’s hair, the hair turned brown and lost all power. At a loss, the witch, having come this far, was not about to leave empty-handed, and opted to just, um, adopt, Rapunzel, right then and there, without mentioning it to her parents. I mean, they were sleeping. Can’t be waking royalty. This is our first glimpse of the frailty of Rapunzel’s hair, and it also explains why Mother Gothel felt the need to lock her in a tower and make her grow her hair so unmanageably long.

Rapunzel’s life doesn’t really begin until years later when, days before her eighteenth birthday, Flynn Rider, who is equal parts criminal and every woman’s dream guy, shows up and whisks the sheltered princess away on an adventure chock-full of ulterior motives. It is on this journey that we learn how Rapunzel’s hair can cure people’s injuries, and also, if ever cut, WILL STAY THE SAME LENGTH FOREVER. This is seen when Rapunzel shows Flynn Rider the small lock of hair left from when her, um, mother, cut it when she was a baby, and it is still the exact same length. Nearing the end of the film, Flynn Rider, selflessly cuts Rapunzel’s hair off into the most layered pixie cut imaginable as she is trying to save him from some fatal wounds acquired from the woman who, to Rapunzel’s surprise, isn’t her mom. Upon being cut with his knife, the hair all turns brown, the witch dies, and Flynn Rider ends up being okay because this is a Disney movie.

To really nail down this hair theory, we need look no further than Flynn and Rapunzel’s cameo appearance in Frozen three years later. Here we can see them entering the castle, Flynn wearing a new, more royal, attire, and Rapunzel with her short, short hair. Same length. Same everything.

This is a tragedy that surpasses anything Disney has thought of yet. I mean, really, the poor girl is locked in a tower her whole life with beautiful hair, and finally, when she gets to leave, she has to walk outside with a perpetual bad hair day that she has no hope of ever growing out of.

This recent plot development poses the burning question: why? What kind of magical hair-follicle-stunting, flower was this? Also, if Flynn Rider had known, would he have cut her hair a little further down? And is Rapunzel aware that the choppy bob has been out since the 90s? Seriously, a little blending in the back wouldn’t hurt. 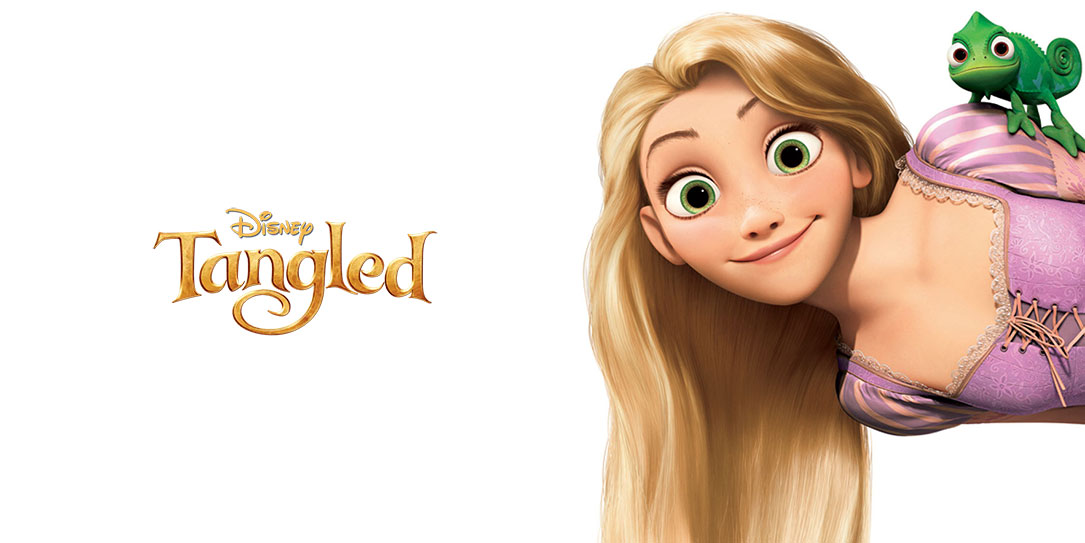