As we all know, patents don’t mean something is going to be produced, but Airbus’s most recent patent from the US Patents and Trademark Office has tickled my Si-Fi-turned-reality bone. The patent was filed under Marco Prampolini, a project systems engineer  and Yohann Coraboeuf, an aircraft equipment businessman with the name “Ultra-Rapid Air Vehicle and Related Method for Aerial  Locomotion.” The patent was filed on July 14, 2015 and contains drawings and descriptions of an aircraft with three sets of engines: turbojets, ramjets, and rocket engines. Using a combination of these engines, the aircraft will supposedly be able to reach speeds of Mach 4.5 – 4 times the speed of sound, around 3000 mph – allowing you to get from London to New York in about and hour. The plane will take off using its two turbojets that eventually retract into the fuselage. Once at a certain altitude, the rocket engine will take over from the turbo jets propelling the plane vertically like a space shuttle breaking the sound barrier sending sonic waves parallel to the Earths surface so that the plane’s sonic boom will not be heard on the ground. Once at a cruising altitude of over 100,000 feet, the rocket engine disengages and the ramjets accelerate the plane to it’s maximum speed of  Mach 4.5.

According to Airbus, much of the plane’s aerodynamics are designed to limit and reduce the sonic boom it will create when it reaches supersonic speed. In the 1970s, the Concorde was beset by complaints of sonic booms and noise pollution created by its four Rolls-Royce Olympus turbojet engines. Consequently, it was prevented from operating over land.

PatentYogi video, a YouTuber who breaks down patents amongst video and cartoons, explains the patent and it’s implication in detail with beautiful renders:

Let us know what you think of Airbus’s new Patent, do you think it will be realized, or gather dust in the bottom drawer of a filing cabinet? Let us know in the comments or on social media! 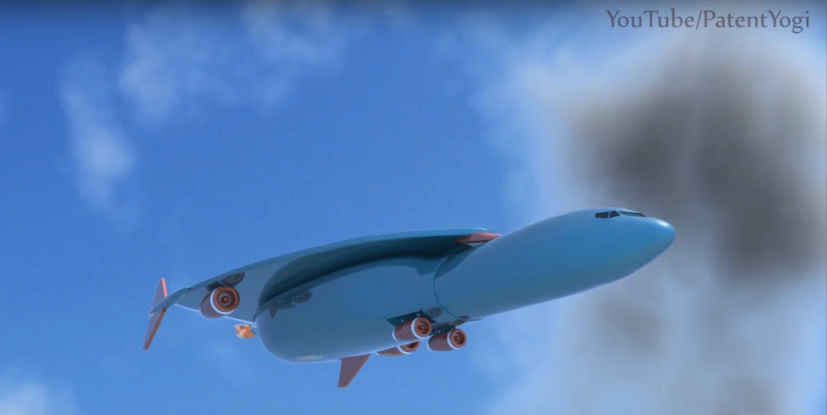