With the New Xbox One Experience launch just a couple of weeks away, the November Games with Gold list marks the start of backward compatibility for the Xbox One. As previously mentioned, starting in November, all Xbox 360 games going forward on the monthly free Games with Gold will be playable on your Xbox One as well. It’s definitely getting close to the time when you might just be able to finally retire those 360s!

Let’s check out what Xbox Live Gold members can snag for free in the month of November, and don’t forget to grab October’s Games With Gold before they disappear! Pneuma: Breath of Life – Xbox One

Pneuma: Breath of Life is an enthralling first person puzzler putting gamers’ minds to the test in a visually stunning world using Unreal Engine 4 and Physically Based Rendering. Pneuma provides players with a sense of awe and a relentless determination to solve every puzzle and progress through a narrated story of self-discovery, exploring the fundamental nature of being. This is the first person puzzler of 2015 which is designed to force players think outside the box and explore beyond what they know as reality. Play as a god, ‘Pneuma’, and listen to his comical self-obsessed inner monologue whilst he takes you on a journey exploring and traversing his puzzling world. Rack your brain and progress through a series of environmental challenges that require perception, observation, and lateral thinking skills to succeed. Lift bridges, rotate platforms and move entire buildings all with the power of your mind. This game isn’t about your skill with a controller, it’s about how you perceive and analyse situations. Push your brain to its limits in this exciting new first person puzzler as Pneuma contemplates the nature of reality and you explore the ontological mystery of the Breath of Life. Knight Squad is a top-down arena based combat game described as Bomberman meets Gauntlet. Players will battle it out using weapons and power-ups in 4 vs 4 or free-for-all matches depending on the game mode selected. The 8-player, top-down, arena combat game with various objectives amidst the one-hit deaths between players is due out later this month. Get ready for DiRT 3 – race over 50 years of iconic rally cars in the snow, rain and dirt or express yourself in freestyle gymkhana events. Featuring the most rally content in the series, experience incredible damage and stunning weather as you race singleplayer, splitscreen and online in multiplayer. Now that evil has returned to Ehb the people turn to the few remaining Legionnaires for the protection of the past . As an heir to the legion will you accept this plea for help?

Are you excited about the November Games With Gold? Let us know in the comments below, or on Google+, Twitter, or Facebook which free game(s) you’re looking forward to the most! 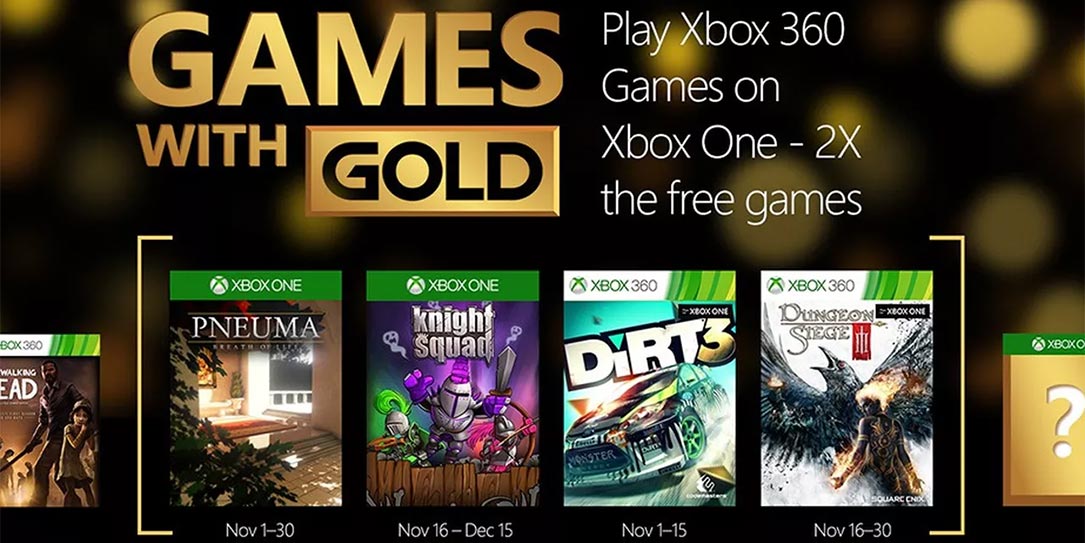 Patreon Funding Is How You Can Help Make Us Better