Rick Allen had to overcome the amputation of his left arm in order to continue playing with rock group Def Leppard and he did a fantastic job and is considered one of the greats to date. Too bad robotics weren’t as advanced as they are today as Georgia Tech has created a robotic third arm for drummers that looks amazing. The project started to help drummer Jason Barnes after he lost his arm in an accident. Barnes has been using his prosthetic for some time now. This new version is designed to help drummers with two arms utilize a third arm to make their drumming even more dynamic. Check out Jason Barnes’ video below first then check out the third arm version afterward.

The system works through a series of mics and sensors on the drums and analyzes the music being played and adds to it. Cameras also show the arm where the drummer’s arms are and it moves to the most logical spot it should be playing and uses that area of the drum set.

“I think this can hopefully inspire the drummer to think about music and play music in way that he or she wouldn’t otherwise,” says Gil Weinberg, founding director of the Georgia Tech Center for Music Technology. “That’s because we have this principle we call ‘listen like a human, but improvise like a machine.'”

“It understands music based on how humans perceive music,” says Weinberg. “But when it improvises, it uses algorithms that humans would never use. We use fractals, and genetic algorithms, and all kinds of sophisticated processes that require complicated computation, the kind of thinking that humans are not likely to think. The response will probably be different—things that you never heard before, things that a computer thinks.”

What do you think of Georgia Tech’s drumming arm? Let us know in the comments below or on Google+, Facebook and Twitter. 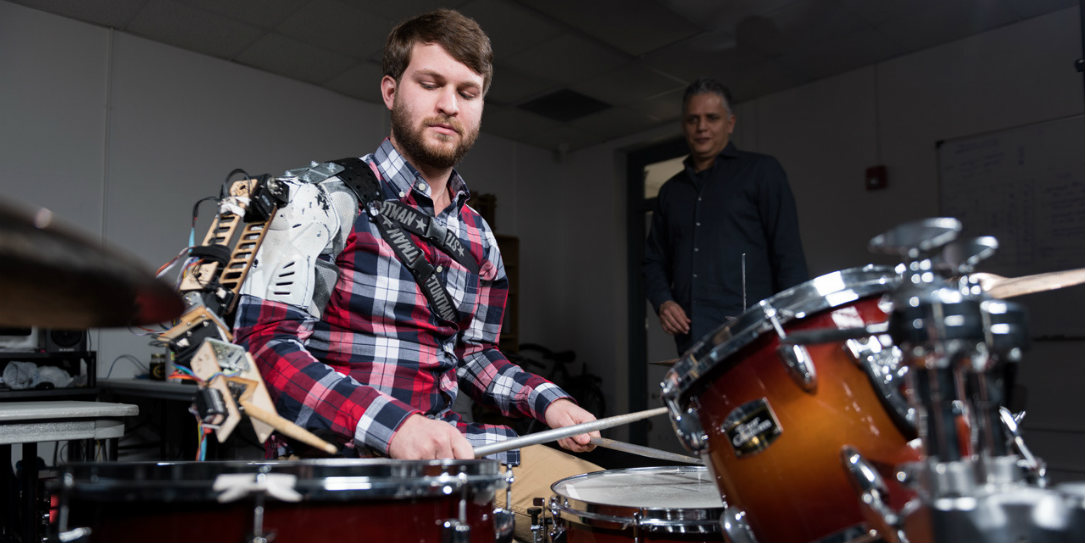 Watch Boston Dynamics Atlas Robot Get Up From A Fall

Leonardo DiCaprio By The Numbers