Audio Technica isn’t new to us here at TechAeris. We’ve previously reviewed their headphones and now it’s time to check out their gaming peripherals starting with the ATH-G1 Gaming Headset. The headset will work with your favorite system whether it be PC, Xbox, PS4, or Nintendo Switch. They are fairly light and super comfortable for those long gaming sessions. Check out the review by reading below.

Audio Technica has made the design aspect of the ATH-G1 really sleek. The gaming headset doesn’t look overbearing when it comes to being on the flashy side. It’s all nice and subtle.

On the outside of both of the closed-back ear cuffs, Audio Technica’s logo is inside a light blue ring. The ring isn’t LED which is fine and it adds in a nice accent color to the all-black headset. The right ear cuff is blank and doesn’t have any buttons or ports, unlike the left side which is where the non-removable cable attaches to the headset and a port where you can plug in the detachable mic. Before heading up the headband, the ear cuffs do have the ability to angle inward to better fit someone head along with the ability to fold inward when you’re done using them.

Ok, back to the headband. It’s made out of either aluminum or stainless steel that gives the headset a strong, lightweight construction that leads up to the headband pad. If you ever do need to replace the pads at some point, they can easily be replaced thanks to the screws at the top of the headset and the ear cuff pads can be pulled off.

As for the cable that’s attached to the gaming headset, it’s 2 meters, or 6.6 feet, long. It has a small control panel on it with a microphone mute switch and a volume wheel to adjust your volume. At the end of the cable is a gold-plated 3.5mm jack that you can plug into your PC, PS4/Xbox controller or Switch system. You will also be able to plug in the 3.5mm jack into a Y-plug for those of you that will be communicating with others for PC gaming and or streaming.

Since this headset doesn’t come with wireless capabilities, you will be using the included 3.5mm jack to plug into your PC, PlayStation 4, or Xbox controllers. Simple plug and play is all you need and you’re ready to start playing games on your favorite console.

Also included in the box is a Y-plug that allows you to connect the headset to your PC’s audio and headphone jacks, letting you talk and listen to the game you’re playing. One end of the Y-plug connects to the end of the headset and from there you’ll need to plug in the rest of the cable. Since they are labeled, you’ll easily know which plug goes where.

Turning up the volume and muting yourself is also simple as it seems but there were a few times when I needed to turn the volume down but it was going up. You’ll get used to it after a bit but something to take note of.

Audio Technica is using large-diameter 45mm drivers in the ATH-G1 Gaming Headset to bring you the full Audio Technica sound quality experience. whether your gaming or using your headset for basic computer use such as videos or music. They have also included a high max input capacity of 1,300 mW to make sure you get the best gaming experience.

When playing games on either PC, PS4, or Xbox, I was able to hear just about everything around me from footsteps to gunshots even if I can’t physically see them to popping a medkit in Fortnite. I thoroughly enjoyed how well these sounded while playing different variations of games.

Day to day PC use while listening to music or watching some videos offer the same clarity that the gaming experience has. I was able to hear voices or any sound effects without any issues and each instrument that is playing is a song. They do offer a decent amount of bass if you do listen to music with them.

As far as voice quality goes on the microphone, it’s not bad when people are actually able to hear me. What I mean by that is I set the mic at a certain distance from my mouth like all my other gaming headsets and people who I was playing with stated they were barely able to hear me. It was if I was far away from the mic. Adjusting it so it’s closer to my mouth fixed the problem, but the mic ended up being about an inch away. It’s not my favorite spot but it did the job.

After that, as I said before, the quality was good. People could hear me clearly and any if at all background noise was canceled out such as me taking a drink of water or eating snacks. Some times it would pick up munching from chips but it wasn’t all the time.

Keep in mind that this may not affect everyone for the mic being far. All settings were set to what they would be with any other headset I had.

I will always say this no matter which company it is for pricing but almost any gaming headset under $150 is your best bet on getting one that will last you long enough and will have more than enough comfort when you play games for hours.

Audio Technica is offering the ATH-G1 for US$169 and while that may be over the limit of what I think is the best pricing for gaming headsets, an extra US$10 is worth it. Sure, it doesn’t come with bells and whistles other than being wired and having a mute/volume control but it’s Audio Technica. A company built on giving you the best audio experience possible. Yes, I’m sure there are other gaming headsets out there for better pricing that do the same thing but they also tend to have a big flashy design that looks a little silly, in my opinion.

The longer I spent using these gaming headphones from Audio Technica, the more I’ve enjoyed the sound quality and how comfortable they are. I’ve stopped using my other gaming headset because these are that good. The price is pretty good and affordable, so you won’t have to spend an arm and a leg, so that’s a plus there. There were two drawbacks to the headset but that doesn’t take away from the rest of the unit and how it operates.

*We were sent a sample of the Audio Technica ATH-G1 gaming headset for the purpose of this review. In some of our articles and especially in our reviews, you will find Amazon or other affiliate links. Running a website does take money, along with time. Any purchases you make through these links often result in a small amount being earned for the site and/or our writers. 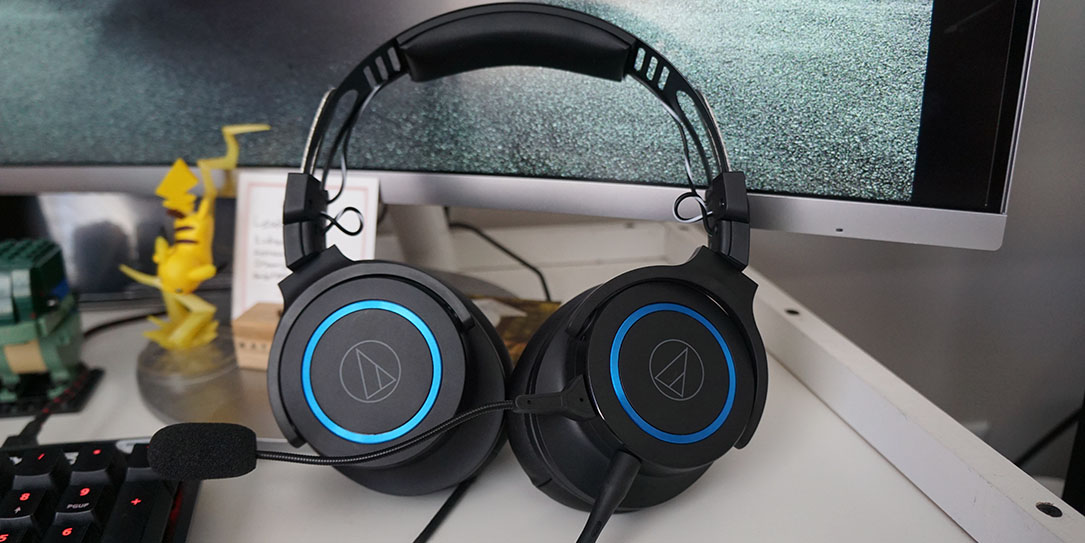