The ROIDMI X20 doesn’t look all that different than other slim cordless vacuums or its predecessor, the F8 Storm. The main setup includes the main unit which houses the motor, a metal connecting rod, and an electric brush. The three components are attached using a release button mechanism.

The main machine is about 17 inches in height, 4 inches in diameter due to the dust cup, and roughly 6 1/2 inches deep when you include the handle. The handle attaches near the back of the motor unit and extends up and over towards the front of the unit. The charging contact and charging port are on the back of the handle. The shift switch (switches between power modes) is on the top near the front while the power button is lower on the handle. The handle merges back into the motor unit and just below where it does are four power indicator LEDs and a Bluetooth status indicator. The motor unit itself has air outlet fins around the top edge. Finally, the dust cup attaches to the underside of the motor unit on the back.

As mentioned above, the main machine attaches to a metal connecting rod. The rod is about 1 1/4 inches thick and about 1 1/2 inches deep. Where it attaches to the main machine and the electric brush, it blooms out to about 1 1/2 inches wide and 2 1/4 inches deep. A grey button sits at the top of the rod in this area. Pressing this button releases it from the main unit, making it easy to take apart.

The electric brush attaches to the metal rod (or directly to the main unit) in the same way. Just below where it connects, the brush unit swivels on a hinge. The hinge allows you to use the X20 almost flat and twisting the unit from the handle causes the brush unit to angle to the left or right. The brush unit has a ventilation hole on the top and an anti-collision bar on the front. On the underside, you’ll find three rollers, a release button, an LED light that automatically toggles on or off depending on the darkness of where you are vacuuming (great for under tables and couches), and a rolling brush. The X20 comes with two brushes: a carbon fiber rolling brush for floor tile, low pile carpet, and floors and a soft velvet rolling brush for floor tile and wooden floors.

Overall, like the F8 Storm, the ROIDMI X20 is nicely designed and should blend into most living areas without sticking out.

The ROIDMI X20 does require minimal assembly after you’ve unpacked it from the box. It is also a simple setup. Start by inserting the end with the release button of the electric brush into the bottom of the metal connecting rod until it clicks in place. Next, insert the end of the metal rod into the main unit until it clicks. The unit comes with one of the two dust cup filters preinstalled so you don’t even need to do that.

Depending on your floor surface, you may want to remove the carbon fiber brush roller that is preinstalled. To do so, press the release button on the bottom of the electric brush unit and then remove the brush roller. Place the soft velvet rolling brush into place and put the locking block back in place to secure it.

Once assembled, put it on the charger (see the Battery section below for more on that) and let it fully charge before use.

We’ll get more into the accessories below, but they are simple to use as well. To use any of them, all you need to do is push the grey button on whatever attachment is currently attached to the main unit to release it. Remove it then slide and click into place the attachment you want to use.

While not needed, the Roidmi X20 is supported by the “roidmi cleaner” app on the Google Play Store. While we didn’t test it, the same app is available for iOS devices.

Before you get too excited, the app doesn’t do much beyond the typical device status reporting, read the user manual, and allowing you to update the firmware. It lets you know the current charge remaining in the battery as well as remaining filter life. If you’re into stats, it also does keep track of and report how many minutes you’ve spent using it as well as the cumulative area cleaned.

We primarily used the ROIDMI X20 on our main floor which consists of vinyl plank throughout and a shaggy area rug in the middle of the living room. Usually, we sweep a couple of times a week to get rid of the dog hair (and other crumbs and whatnot) from our two lovely dogs. The problem with sweeping, however, is that it tends to float about and doesn’t all get collected.

The first time my wife used the X20, you could tell she was much happier with the end result. Not only was it faster than sweeping, but it sucked up pretty much all the dog hair and anything else that was on the floor. It did fill the dust cup pretty quick and she had to empty it twice. That was the first go, however, and after that using it two or three times a week barely fills the canister. It may be a bit on the small side but it works just fine for us and emptying it mid vacuuming isn’t that big of a deal. As far as the speed used, the standard mode setting is adequate for 99% of our floor vacuuming with the high setting used very rarely for bigger clumps of hair under couches.

I did test it on lower shag carpet with the carbon fiber rolling brush as well and it worked rather well. The canister did fill up much faster however due to the amount of hair trapped in the carpet, but that just means it was doing a decent job of picking it all up. I did find that I had to up the suction to high and even enhanced, however, while on carpet to get more suction. We do have a lot of carpet and personally, I think the ROIDMI X20 shines better on floor type surfaces as well as furniture and in nooks and crannies.

With the included attachments, you can also vacuum mattresses, sofas, and hard to reach areas with the flat head cleaner. The X20 also comes with a mop attachment which connects magnetically to the electric brush unit. When vacuuming with it on, it lets out a little bit of water and does an o.k. job of giving the floor a bit of a clean while vacuuming. It’s not intended for heavy-duty mopping jobs but used once a week does keep the vinyl plank flooring clean enough.

There are three speeds on the ROIDMI X20: standard, high, and enhanced. On standard speed, with the main roller attachment in place, we consistently get just over an hour. On enhanced speed that drops down to 12 minutes while we get just over 30 minutes on high power. As mentioned above, even with two kids and two dogs in the house, the standard speed is more than ample for a good cleaning.

When depleted, it takes about 2 1/2 hours to recharge when connected to the wall charger. The wall charger is easy to install and comes with screws, rubber plugs, and drywall anchors. The back of the wall charger also has a sticker on it which, as I found out by accident, is quite strong. When placing the wall charger against the wall to see where I would need to place the screws, it stuck in place and, to be honest, has been there ever since — no need for screws.

One thing I will say is that the power adapter sticks quite a bit out of the wall when used with the universal AC adapter for North American power outlets. The main adapter that came is an EU style adapter, hence the need for a second adapter for our outlets. When installed, both adapters combined stick a good 5 inches or so from the wall outlet.

We’ve already briefly touched on the included accessories. The main accessory that comes with the ROIDMI X20 is the water tank mop attachment. As mentioned above, it attaches magnetically to the electric brush unit, allowing you to vacuum and lightly mop at the same time. The water tank is easy to use with a removable water tank cover plug that allows you to fill it with water. On that note, the water tank is only to be used with clean water and no cleaning detergents should be added to it. As such, while it does clean, it’s more of a light wipe on your floor as opposed to a full on scrub clean.

The X20 also comes with a flat cleaner head which is useful for inside the corners of furniture, corners of walls, and other hard to reach places. The included sofa brush attachment slides into the end of the flat head cleaner for use on furniture. The sofa brush has soft bristles angled outward and a soft felt-like pad on the inside. Pressing down will splay the bristles and allow the pad to rub against the fabric of your furniture. The combination of the two works fairly well for cleaning hair and dirt from your furniture.

Another included attachment is the soft stretch hose. It is very flexible and allows you to bend it as you wish to reach really hard to reach places. Roughly 14 inches in length, the hose attachment stretches to around 26 inches, giving you great reach and flexibility. The hose has a flat cleaner head on the end of it for small areas and corners.

Finally, the ROIDMI X20 also comes with a mattress brush attachment. This attachment is powered like the main electric brush unit. The brush itself consists of two soft brush like rows alternated between two harder squeegee like rows. According to ROIDMI, this attachment is great for cleaning your mattresses regularly and getting rid of any nasty critters like dust mites that might be residing there. While I couldn’t verify the existence of such creatures, the attachment does seem to work well on mattresses.

As with the main unit, all the accessories are well built and feel very durable. Every attachment felt solid when attached to the main unit or one of the hoses with no wiggling or signs it was loose. Even though we’ve only had it for about a month-and-a-half, I’m confident it will last for months and, hopefully years, to come.

With an MSRP of US$499, the ROIDMI X20 is far from the cheapest cordless vacuum cleaner out there. It is, however, currently listed on Aliexpress for $449 which does offer up some savings. While there are more expensive cordless stick vacuums out there, they are few and far between. That being said, the build quality is fantastic, as is the performance on floors, furniture, and hard to reach spots. If you have the money to spare, the X20 is definitely a versatile cordless vacuum that is handy to have around the house.

While it does work on carpet, the ROIDMI X20 shines on bare floor surfaces like vinyl plank and tile. With the mop accessory, you can vacuum up dirt and dust and give your floor a quick rinse at the same time, killing two birds with one stone. With plenty of accessories for other cleaning, the ROIDMI X20 does offer great versatility if you have the money to spare. 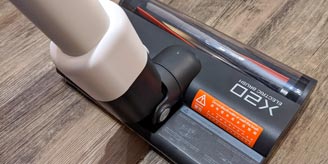