Last year, I had the opportunity to review several BenQ projectors, including the TK850 and TK810. While the TK850 had a pretty simple interface, the TK810 tried to up the streaming and smarts with its interface. Unfortunately, in my opinion, the options and features on the TK810 offered up a substandard streaming experience.

Given the BenQ TK850 is still one of my favourite BenQ 4K UHD projectors to date (tied with the HT3550), I was pretty stoked to hear that the company was adding Android TV to both. They were also nice enough to send the TK850i over for a mini-review.

Our BenQ TK850i review looks at the Android TV features of one of the company’s flagship 4K UHD projectors to see if it offers a better experience. I’ll note that the TK850i is identical to the TK850, so that I won’t be covering design or display quality; you can read our previous review to catch up on those aspects of the projector. I will include those same scores as part of the overall rating for this review, however.

The BenQ TK850i sent to us has the following features and specifications:

While the design of the BenQ TK850i is nearly identical to the TK850, there are a few differences. For starters, under the top panel is a Micro-USB charging cable and an HDMI port for the included BenQ QS01 Android TV HDMI dongle. The stick itself is fairly compact, roughly 3 1/2-inches long, 1 1/4-inches wide, and about 1/2-inch thick. On one of the short ends is an HDMI connector. A Micro-USB port for power is located on the side of one of the long edges.

Secondly, in addition to the regular BenQ projector remote, a second Android TV remote controls the dongle. The remote has a microphone and LED indicator at the top. Beneath this are six buttons: Power, Focus, Keystone correction, Kids TV, Source, and Amazon Prime Video. A typical round navigation disc with an OK button in the middle is below those. Six more buttons are below the disc and let you go back, to the Android TV home screen, access the Android TV settings menu, mute, voice search, and finally, open the projector menu. Last but not least is a stacked volume control button for raising or lowering the volume. The remote itself is fairly slim, about 6-inches by 1 3/4-inches, by just over 1/2-inch thick.

Oddly enough, the second remote can control pretty much everything on the projector. Missing are the obvious buttons for quick access to toggle HDR, Cinema Master, Sound Mode, and other picture settings. However, these can ball be accessed on screen by pressing the Projector Menu button on the Android TV remote. At first, I thought it odd they include both, but at least you can choose which to use, especially if you’re not using the Android TV dongle component.

To use the Android TV and streaming functionality, you’ll have to install the streaming stick inside the projector’s top panel. A removable sticker on the top of the projector outlines the steps. There is a single screw on either side of the panel, which you’ll have to loosen. Once you’ve done so, pull the panel forward — not up — and plug the Micro-USB into the streaming stick. Once done, plug the stick into the HDMI port and replace the panel. Alternatively, if you have a USB-A to Micro-USB cable, you could install the dongle to one of the rear HDMI ports using the USB-A 5A port also located on the back of the projector.

Once you’ve powered the projector on, you’ll be prompted to pair the Android TV remote with the dongle. This is accomplished by pressing the OK button on the remote for about three seconds. Once paired, you’ll see a success message on the screen. Next, you’ll be asked if you want to use your Android phone to set up your device. Go into your Google app and search “set up my device.” In my case, my phone then displayed a code that matched the one that appeared on the projector screen. Press next on your phone, select the Wi-Fi network that appears (if correct), then copy your Google account and settings to the projector. Rather, more accurately, the Android TV dongle.

Once copied, you’ll be prompted to continue set up on the projector. Accept the terms, allow (or disallow) location access, allow/disallow the sending of diagnostic information, set up voice control, enable/disable personal results, sign up for Google Assistant emails, choose or create a name for the projector, and choose which apps to install. I was given the usual, including Spotify, Netflix, Twitter, Plex, a couple of games, and Google Duo. Google suggested YouTube for Android TV, while BenQ suggested Disney+. Finally, you’ll have to accept the BenQ terms of service.

All said and done, the setup took about 10 minutes, which included the actual installation of the dongle itself.

The BenQ TK850i QS01 dongle runs Android TV, currently version 9. If you’ve used Android TV (not the newer Google TV interface found on the new Chromecast), this will be familiar to you. If not, it’s pretty straightforward. The top row is your apps, with a link to the Play Store to install more apps of your choosing. Below this is YouTube, a Featured by Google Play row, and in my case, Disney+, Spotify, and Plex. Of course, you can customize the order and what appears in these rows based on what you have installed.

In the upper right corner are a settings cog and the time. The settings allow you to access and adjust network settings, accounts, apps, device preferences, remotes and other Bluetooth accessories, and projector settings. You can also easily use the voice search button to invoke Google Assistant and ask to search for a specific movie or show, launch an app, and other Google Assistant functions like asking for the weather, controlling your smart devices, and more.

Pressing the Kids TV button on the remote launches the BenQ FamiLand app, which boasts secured content for kids. If you wish, you can download an iOS or Android app to your phone to add more channels, play videos, and share YouTube content to the FamiLand app. By default, there are about 30 channels with content including ABCKids, Nick Jr., nursery rhymes, Sesame Street, Peppa Pig, and more.

From Amazon Prime, Disney+, and Plex and casting from my device, I had no issues with streaming on the BenQ TK850i through the included dongle.

That being said, the TK850i is currently on sale for $1599, which is definitely worth it over the regular price of the non-Android TV TK850.

Even though it uses a dongle that requires installation, Android TV on the BenQ TK850i is a much better experience than the Aptoide TV software used on the BenQ TK810. The TK850i builds on the already excellent TK850 and adds Android TV for an all-in-one 4K streaming-capable projector. The great news is that the HT3550 is also available with Android TV as the HT3550i model for those looking for DCI-P3 colour coverage.

If you are looking for a 4K projector with streaming functionality and Android TV, the BenQ TKK850i (and presumably the HT3550i based on our HT3550 review) is a solid choice — assuming you can get it on sale. 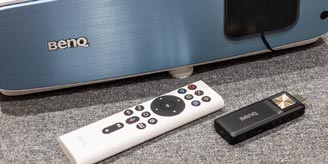 LG gram for business review: A super-light business laptop with plenty of screen